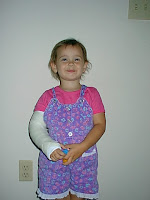 When Jaise was three she dislocated her right elbow. We never did figure out how that happened, but our best guess is that she and Trey (4 at the time) were fighting over something and when Trey yanked it away from her, he pulled out her elbow. Wonderful parents that we are, we didn't even notice anything was wrong for a few days. Then it dawned on us that she wasn't using her arm and she kept it in a weird position all the time. *duh* So I took her to the doctor. I left the room when the doctor and two nurses tried to reset it. (Yeah, I'm a baby about stuff like that!) The doctor was unsuccessful, so she sent us right over to the emergency room. The doctor there tried to reset it, and was also unsuccessful, so he sent us right over to Children's Hospital. Once there, Jaise had had enough of people in white coats hurting her, so she did not let them touch her. The doctor put a soft cast on it and two weeks later we took it off ourselves and everything was fine. 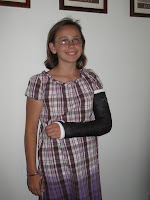 In May, Jaise arrived at school and had just gotten off the schoolbus, when a Kindergartener we know ran over and clung on to her leg to give her a hug. Not expecting this, it threw Jaise off balance and she landed on her left elbow. However, this wasn't the story I got. The NEXT DAY Jaise tells me she hurt herself at school and showed me her elbow. It was bloody and nasty-looking. I cleaned it and bandaged it up for her. All she said was, "I hurt my elbow at school." A couple DAYS later I notice she's holding her arm funny. I thought maybe the scab was hurting her since it was on a moving joint. I asked, "So, Jaise, how did you hurt your elbow anyway?" Well then the real story comes out. This was on Friday afternoon.... and there was no way we were getting a doctor appointment now. So we waited out the weekend. On Monday I took her in and the doctor sent us over to Children's Hospital emergency room for x-rays.... which came back inconclusive, but to be safe they put a hard cast on for 3-1/2 weeks. She missed out on several fun activities and it came off the day after school got out. You should have seen the difference in arm sizes just after three weeks. It took her a couple more weeks to get used to using it again.... but I was so glad to not have to wash her hair for her in the sink anymore! 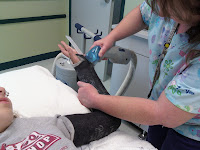 Cutting the cast off 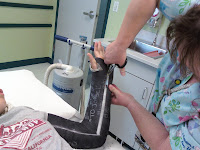 Cutting through the inside layers

Posted by The Pender Family at 5:07 PM 1 comments 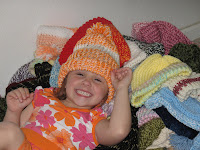 Chaye recently had her check-up and shots to register for Kindergarten. She had to pee in a cup (never had one of the kids do that before!) and as I held the cup for her she said, "Okay, THIS is weird." I had to tell her to stop going before the cup overflowed onto my hand! When we got back into the exam room she told the doctor in a giggle, "I can't believe you have to test pee. That's just weird." She had to have four shots on Friday, and we had to go back on Monday for a TB skin test. She didn't NOT want to do this, so I offered to get a TB test as well, and she could see how brave I was. (Yeah, I'm so brave I have to look the other way when they put the needle in!) Well, she ended up hiding behind the exam table, so it will probably be a wasted $100 for me when I get the bill. Ryan held her for both appointments, and I thank him greatly for taking time off from work to be there with us because I don't like to hold the kids down for shots. Babies I can handle, but once they can yell out, "Mom! Why are you doing this to me?!?!" I just don't do that well.

Chaye constantly says the funniest things. She has the vocabulary, wit, sarcasm and humor that is equal to or above most adults. (You can thank both of her parents for the sarcasm!) Her Kindergarten teacher is going to be in for a surprise! Here's a funny conversation we had recently:
CHAYE: I think I need a haircut... what about you?
CHANNA: Yeah, I think you need one.
CHAYE: No, I mean, do you think you need a haircut?
CHANNA: Yeah, I probably should.
CHAYE: Well, I sure hope your butt fits in the chair.

I don't take offense to this because the shop we go to has a little kid chair with a metal bar in between the legs so they don't fall out. It's quite apparent that my butt would not fit in the chair, however, I'm so glad she was concerned for my butt's welfare. :)

Another thing she did recently: Our RS president chose a slightly annoying Primary song as the closing song at Enrichment Night. It was the kind of song that gets stuck in your head, very similar to the Barney "I Love You" song. I couldn't get it out of my mind and it was driving me nuts! I fell asleep singing it in my head, so of course it was incorporated into my dreams. The next morning when I woke up, stupid me thought to myself, "Oh! Yay! I can't remember the song!" And then it came to me. So I was telling this to the RS president, who is a very good friend of mine. Then she couldn't get the song out of her mind. I'd call her at work throughout the day and when she answered the phone I'd start singing it just to get it in her mind again, as payback for the insanity she'd put me through. So later on Chaye was telling me about the dream she had. Then she asked me what my dream was about. I told her I didn't remember. She said, "Oh I know what it was... it was about...." And then she sang that song and started laughing!!!! So then the song was in my head again and she thought that was hilarious!
(And of course I'm singing it in my head again now that I've written about it....aaaaggghhhh!!!!)

Posted by The Pender Family at 2:21 PM 2 comments

The End of Cuteness...

Tate lost both his top front teeth within a day of each other. The whole time his teeth were loose, we kept joking with him and telling him how sad it will be when the permanent teeth grow in because he'll look like a rabbit and won't be cute anymore. We aren't being mean, really; you know what we're talking about if your kids have lost their top front teeth. The new ones are big and just aren't as cute as the baby teeth were. So the day Tate lost his first tooth, he announced in the car, "I've lost half of my cuteness!" And then the next day he proclaimed, "Well, it's official. I am no longer cute!" Which is cute in itself, really. Here's the before and after.... 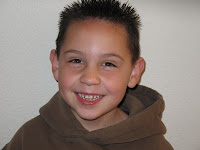 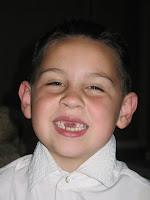 Posted by The Pender Family at 10:29 AM 1 comments 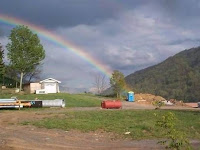 Someone finally found the pot at the end of the rainbow!
Happy St. Patrick's Day!
Chaye calls it "Leaf Day" because I have a shamrock icon on the date square on the calendar. When she was anticipating Valentine's Day, which has a heart, she kept asking, "How many days until Heart Day?" The Thursday before Feb 14th, when she asked me, I said "Two days." Then she jumped up and down and said, "Then we get to celebrate Leaf Day!" I asked, "Leaf Day? What's that?" And she turned the calendar page and pointed at the shamrock. Then she asked, "What happens on Leaf Day? Do we get stuff?" (Hmm.... get stuff, get pinched; get stuff, get pinched; I like her idea better!) So I got her a Tinkerbell Look & Find Book (I collect those) because it's green. I'll give it to her tonight at dinner - we're having green salad, green fettucini alfredo with broccoli, and mint chip mud pie for dessert. And I had to get her a green shirt because she didn't have one and was terrified that Paige was going to pinch her. I didn't get anyone else anything..... oh well, they'll survive. :)

Posted by The Pender Family at 7:09 AM 0 comments 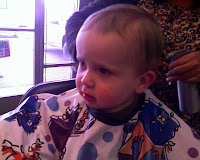 Not too sure about what's going on. 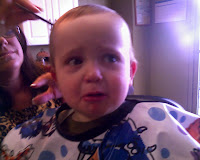 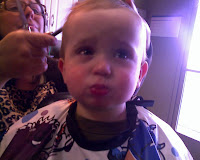 Distracted by someone else in the shop. 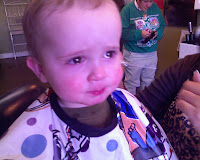 Look at those crocodile tears!
(Where does that phrase come from anyway?) 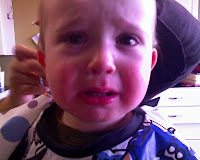 Posted by The Pender Family at 11:07 AM 1 comments