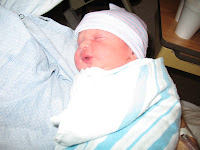 Originally due November 4th, we scheduled to induce on October 25th because ultrasounds showed the baby measuring larger. Then the induction date was changed to October 19th. Channa had a Dr. appt. on the 15th and was told her blood pressure was high. Induction was scheduled in 2 hours. 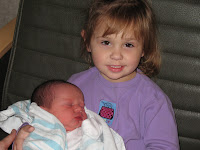 Channa had to get Chaye back to Madera to a babysitter, and then back to the hospital, which was a 45 minute drive each way. When she and Chaye got to the car, the tire was flat and there was no jack to change the tire. Chris came to the rescue by driving out to pick up Chaye, while Channa waited for Ryan to meet her at the hospital after he finished up with his clients. 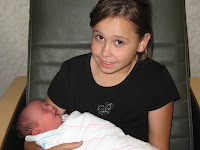 The induction was started and everything seemed to be progressing well. (Although the epidural didn't work well and caused itching from head to toe. Channa had to have 2 bolus shots, the last one sending her into LaLa Land and requiring oxygen.) Six hours into it, dilated to a 9, the baby went into distress and the heart rate dropped significantly. The Dr. decided it would be best to do an emergency C-section. Channa always had a feeling that this pregnancy would end up in a C-section, but what could she do about it now? 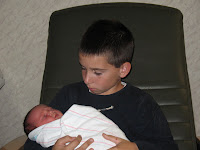 It was a good thing the C-section took place when it did, because the baby came out blue. Once things were under control, Ryan asked, "Well, what is it?" After 9 long months of anticipating, we were told we brought a son into this world! Although at times we were tempted to find out the gender, it was a nice surprise to wait it out. Channa always thought we'd have 3 boys and 3 girls, and had a boy name picked out for 15 years, so it's a good thing it was a boy because we didn't have a girl's name chosen! Trey is happy to have a brother - mostly because now he gets his own room and Cade will share with Tate. 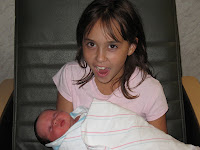 Channa and Cade came home on Wednesday afternoon. On Thursday Channa noticed Cade's hands and feet turned blue several times throughout the day. They also got bone-chilling cold, despite having socks on, a PJ, and being wrapped in a blanket. She wasn't able to get Cade to eat all day. Then Cade turned completely blue from head to toe. We called the Dr. and he said to get him into Children's Hospital ASAP. 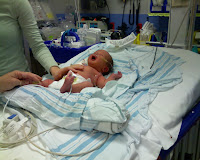 At CH they did an echocardiogram, a spinal tap, and various bloodwork to find out what was going on. Cade's oxygen saturation level was low and he had a fever. His heart was fine and the spinal tap showed nothing. Maybe an infection of some sort? We'd have to wait 48 hours for the blood cultures to come back. Ryan got Channa and Cade situated in their hospital room and returned home at 1:00 a.m. Ryan returned to the hospital on Friday to be wtih Cade while Channa went to see her Dr. about complications she was having. Her blood pressure had skyrocketed and if bloodwork came back positive, her Dr. was going to re-admit her to the hospital. Two hours later the results were negative, and she was told she absolutely had to get some rest and keep her feet up. Kind of hard to do while keeping watch at the hospital and sleeping on a very uncomfortable couch, coughing like crazy, and trying to find some way to position herself so the C-section incision didn't ache. 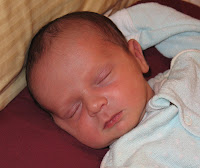 Ryan returned to the hospital again on Saturday so Channa could go home and shower and change clothes. She hadn't showered since Tuesday and had been wearing the same clothes for 3 days... (gross, yeah, we know!) Then back to the hospital for another uncomfortable night on the couch. While she was gone, the Dr. had told Ryan that Cade was doing great. They were giving him antibiotics to combat any infection or bacteria he may have picked up. As long as the cultures came back negative, we could take him home Sunday morning. This news was the only thing that kept Channa from having a complete break-down at this point. Just one more night.... 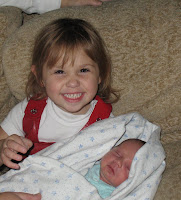 Sunday morning brought the good news that we were going home. After one last blood draw, Cade was given the okay and Ryan took his wife and son home from the hospital... again. The three of us enjoyed a quiet nap before Ryan & Jan brought the other kids home from church. Since then, Channa's cough has subsided somewhat, the staples were removed, the incision doesn't hurt as much, her blood pressure has come down some, she has gotten some rest, and has lost 30 pounds. (Although she's pretty sure she passed a gallstone last night. She is so sick of hospitals she refused to go to the ER!)

Chaye is very happy to have Mom and Cade home. Her world was topsy-turvy while they were gone and she didn't do well with the disruption. 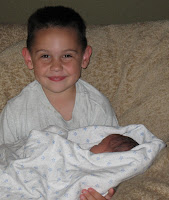 Tate is extremely happy to have a little brother. He informed us during the pregnancy that if it was another girl, he was moving out because "that would be way too many girls in this house!" We're happy to know Tate plans to stick around awhile longer.

Posted by The Pender Family at 8:05 AM 1 comments